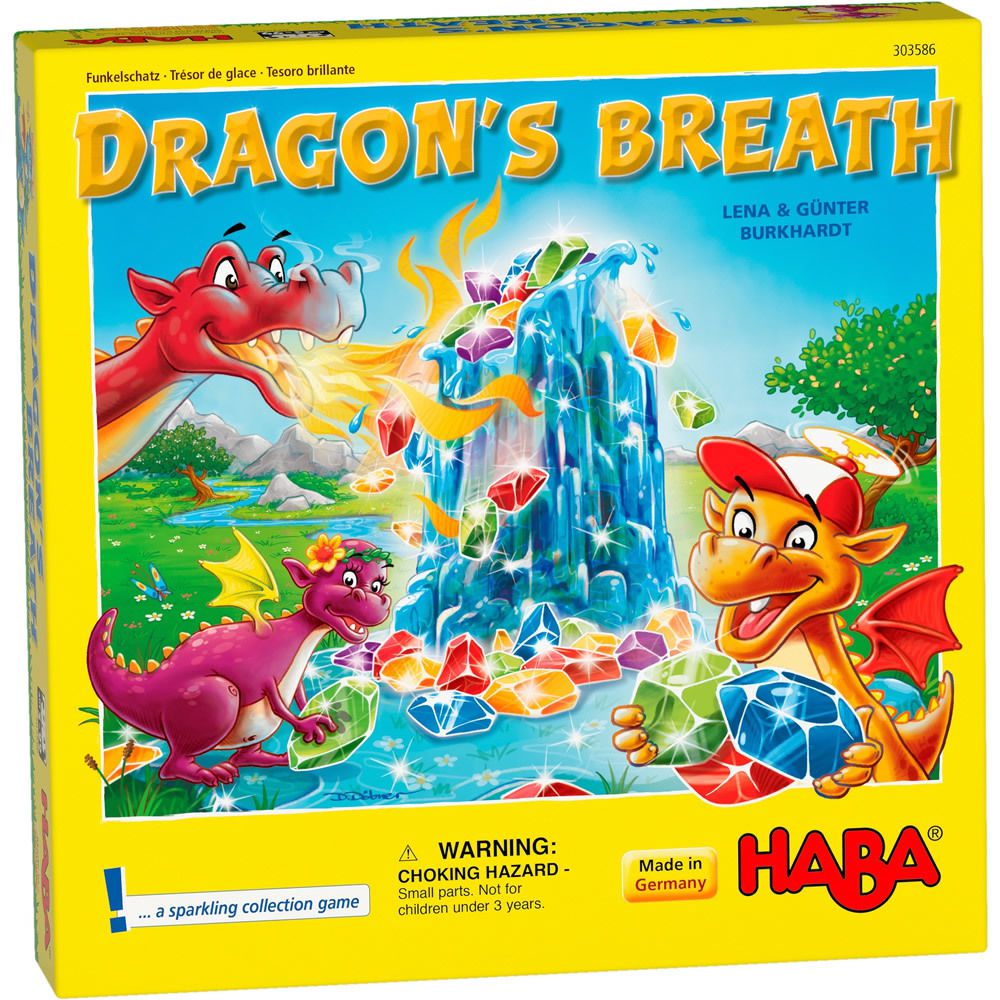 Horray! All that exploring has paid off, and you finally found something. As little dragons, you’ve been exploring the cave and found a huge column of ice with some really shiny gems inside! But… you’re little and can’t blow fire yet. But dad can! So go off and grab him, and bring him to the cave so you kids can collect some of those cool sparkling stones, and then bring them back to your little cave. Will you get the most shiny gems?

Dragon’s Breath is the 2018 Kinderspiel des Jahres (Kid’s Game of the Year), an award won by some great games (including one favourite here, The Enchanted Tower). It’s a simple set collection game that looks great and has some really cool mechanics. You play 8-9 rounds (depending on the player count) and try to collect as many gems, which you hide each round so it’s hard to keep track of who is winning until the end! So does Dragon’s Breath shine like those gems, or will it melt into oblivion like the ice column? Let’s find out!

Haha usually has great components (like Animal upon Animal and Karuba Junior), and Dragon’s Breath is no slouch. When you set up the game, it looks great and how the designers utilized the board into the gameplay is just awesome. There’s a lot of gems included, and the dragon dad figure is great. I was skeptical about how well the cardboard under the board would hold up, but after multiple plays (including some by my not so gentle preschooler), I can say it holds up well. Another amazing design by Haba!

Before you play the first game, you can set up the dividers in the box and left them like that for future games. You can leave them set up in the box like this, and just put the components in the compartments. To set up the game, put the game board on top of the dividers and place the ice floe tile in the middle of the board, Each player will choose a colour dragon and place them on their corners, and place the remaining dragons in the unused spaces. Place the appropriate number of ice rings on op of each other around the ice flow (8 for 2 or 4 players, and 9 for 3 players). Place the face up gem tiles  and the dragon dad figure to the side, and slowly fill the ice column with the gems. If there are any leftover, put them in the small drop holes in the middle of the board. Now let’s begin!

The bravest player will go first (or in our house, I usually let the youngest go because they’re impatient). That player takes the dragon dad figure, and the game begins! The game has 3 steps you take each round:

When the last ice ring is removed, you will not take any of the gems remaining on the ice floe: it is off limits. Then the board is lifted out of the box, and players count their collected gems: whoever has the most is the winner!

There are 2 variants included in the game: the first is for younger players, where instead of choosing a gem tile each round, you pick one at the beginning of the game and keep it for the rest of the game. The 2nd is the secretive variant, where all the gem tiles are face down. You pick them secretly and hide them, so no other players know what colour you want.

Haba has always produced great looking kids games, with solid components that can have fun effects on the gameplay. But… just because something looks good doesn’t mean it’s actually fun. But with Dragon’s Breath, they hit a nice sweet spot between looks, functionality and gameplay, and it’s something that my kids just love and I quite enjoy as well.

One of the most important thing about playing games with young children is to keep them engaged, that’s why games that are interactive are so important. And I don’t mean interactive as in digital, but as in getting their hands on and interacting with the game, and that’s where Dragon’s Breath shines. Not only is it fun to set up, but playing it and removing those ice rings is fun and engaging, and it’s one of the best parts. Kid’s love being involved in the game, and it’s a simple mechanic but it really makes this game truly stand out.

The game is also easy to teach. The steps are easy and while my kids can play games above their ages, it’s not always the same when kids who don’t play come over. But Dragon’s Breath is so easy to teach, and just looks so great set up that people are drawn to it and kids are happy to play it. Really great job to Haba for making this game so approachable.

The best part for me though are the variants, and here is why. I have a 5 year old and a 3 year old… and both want to play this game. The regular game is a little harder for the 3 year old, who doesn’t quite have the attention span, so by just choosing a colour and keeping it for the whole game, we eliminate one step and that’s just perfect, because he can keep focus and is excited when his colour drops every turn. But… my 5yo just loves hiding her colour, so when just her and I play, the secretive variant is a lot more fun and adds some intrigue. Yes, those would be easy to house rule, but the fact that the developers thought about it makes this game EXTREMELY accessible to all ages. Kudos for thinking of that for all kids.

If there is one thing that some people may not like… is that there is almost no strategy involved. Yes, you can decide which colour to choose and how you pick the ring up, but the game is basically “on rails” and you’re just playing along. Some people wont like that (and maybe older kids), but the game is so much fun it doesn’t matter to me. It is something to take note if you’re looking for a more strategic kids game, as Dragon’s Breath is very luck based, but it truly is a blast and it’s easy to look past it.

As I said, the bottom line is that Dragon’s Breath is just FUN. I’ve played it so many times with my kids, and they still enjoy it and so do I, and it doesn’t look like its going to get old anytime soon. I really feel it deserves it’s Kid’s Game of the Year award, and it just looks so cool set up and the gameplay is a blast. Haha did a great job and I really recommend this game for younger kids and parents alike: it’s hard not to have a blast playing this game!

*Thank you to Asmodee Canada for providing a copy of Dragon’s Breath for this review, and you can find more about them and their games by clicking here.*