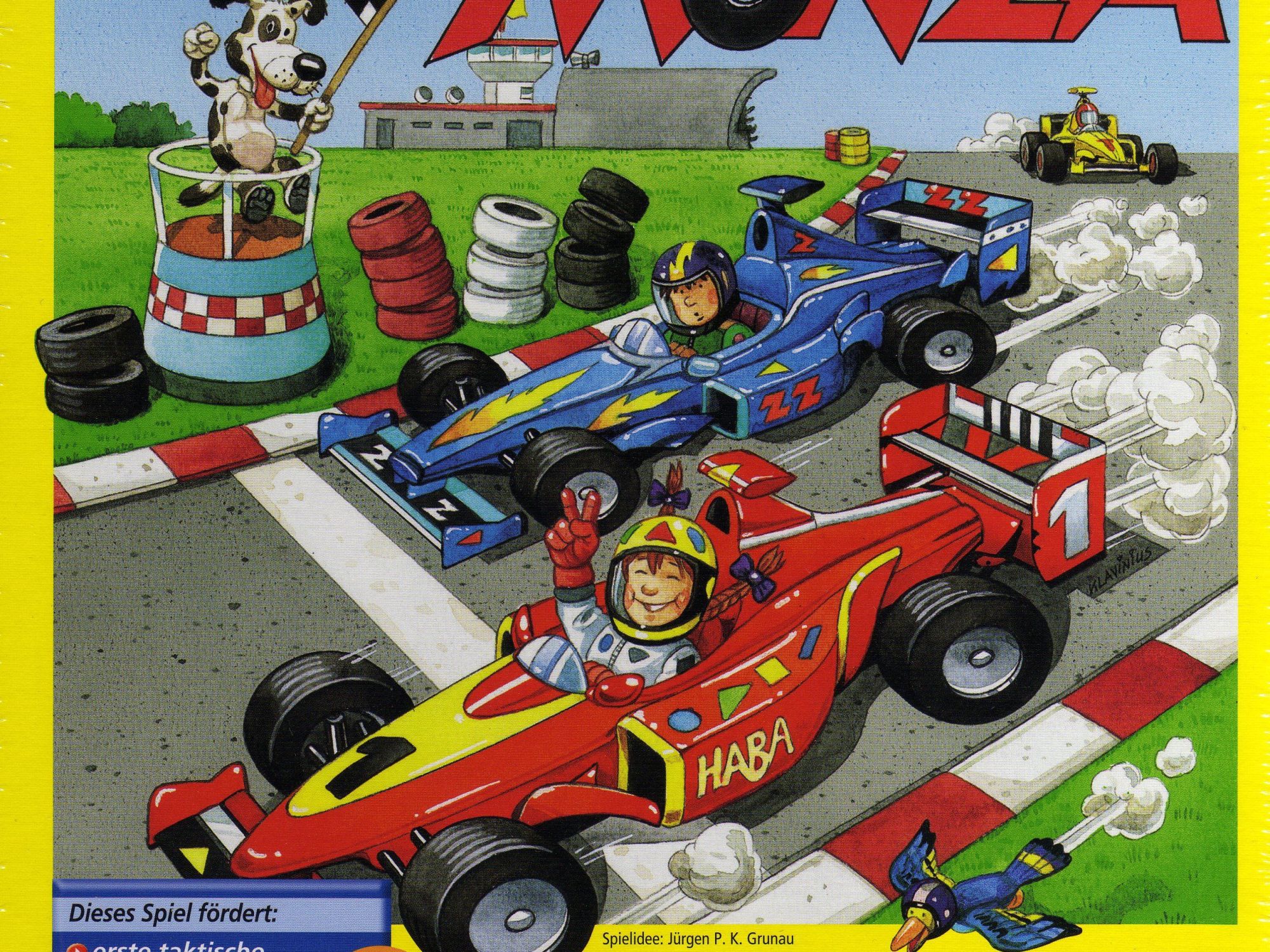 Welcome to the racetrack! You and (up to) 5 of your friends have come to the racetrack, ready to take on the gruelling rainbow-track, and with some careful planning and a little bit of luck perhaps you will be able to make some inside cuts and be the first one to the finish line, as long as you don’t get stuck behind some obstacles!

Monza is a 2-6 player race game, and there’s quite a few clever mechanics. You use dice, but not in a traditional way with rolling numbers, but rather you roll dice with colours and use them to move on the track, carefully planning your actions and trying to cross that elusive race line. Do you have what it takes to be the fastest driver?

Inside the box there is a board, 6 wooden race cars and 6 wooden dice, and thats it. The board is colourful, the wooden cars are really great (my 2yo son keeps trying to steal them) and very waldorf-inspired, and the wooden dice are nice and colourful. It’s totally up to the standards of every other HABA game out there, but it just feels there isn’t as much in the box as other games of this size (much like Animal upon Animal, which has like a bajillion wooden animals). That being said, what is in there is colourful and attractive, and definitely looks great on the floor or table (it’s a kids game after all).

To begin, set the game board in the middle of the playing area and each player will choose a race car and place it on the matching arrow at the starting line: if there are any remaining colours, they are places back in the box. The youngest player goes first, and gets the 6 coloured dice: the race is ready to begin!

On your turn, you will roll the 6 dice and then move your car based on the colours… wait, how do you do that? Well, you have to look at your colours and plan: to make a move, you must spend a dice of a coloured spot ahead of you to move onto it. You may change lanes, but only if they are touching the front of the spot that you are in. Like a real race, you may never move backwards or even sideways, you may only move forward. You will spend one die at a time, and when you cannot move anymore, your turn is over. There are some things to consider:

When you are finished, pass the 6 dice to the next player, and play continues until one player crosses the finish line on the blue or white space. Keep track of how many dice were used to get there, and the current round finishes and if multiple players make it to the finish line, the player who used the least amount of dice that round wins the game!

There is also a variant included, in which if a player does not use all the dice, the players whose colour match the remaining dice may move one space forward (even if the space isn’t the same colour of their dice).

Monza seems like a simple roll and move game, but it has one thing that sets it apart, and that is the planning aspect of it. You may be at the mercy of the dice rolls, but you can also take hat you have and maximize it to its best potential. It’s really a perfect way to introduce kids to a dice strategy game, because it will allow them to plan ahead and  strategize. It’s also a lot of fun when you can chain moves together and have a really great turn.

I mentioned the components earlier, and while you don’t get a lot, what you get is really nice. I love the cars (again, very Waldorf inspired), and the dice are nice look great. The board looks great as well and is very colourful and bright. One thing that would have been nice to include would have been a double sided board, with perhaps different obstacles and colour placements just for variety, but due to the random nature of the dice rolls, there is lots of replayablity.

Monza is a lot of fun with 2, and gets better as you go up in player count. Just keep in mind at 5&6 players, if you have impatient kids you may have a hard time keeping their attention between turns, but the variant is great for that, because now every turn could give other players a move so they become more engaged with every turn.

That being said, with any dice games there is the chance that you might not get to move at all, and thats no fun. HOWEVER… there are variants of the game that can help. There are some dice drafting variants out there, but the one that I’ve found helpful uses similar mechanics to Reiner Knizia’s Age of War and/or Elder Sign, where if you don’t like your roll (or don’t have any moves), you can remove a dice and re-roll again up to 2 times. So if you rolled a bad hand, you can take one dice away and roll 5 instead of 6, and then do it again if you wish and then only have 4 dice to use that round. I normally don’t like using variants, but when you have young kids you have to, and this one works well.

That being said, Monza is a really great game and really fun. It has very nice components, simple gameplay for kids and really helps them think ahead and plan their actions. It has some minor flaws, but they can easily be fixed or overlooked, but hey it’s a kids game. It’s been a lot of fun here and I highly recommend it for gaming with young kids!