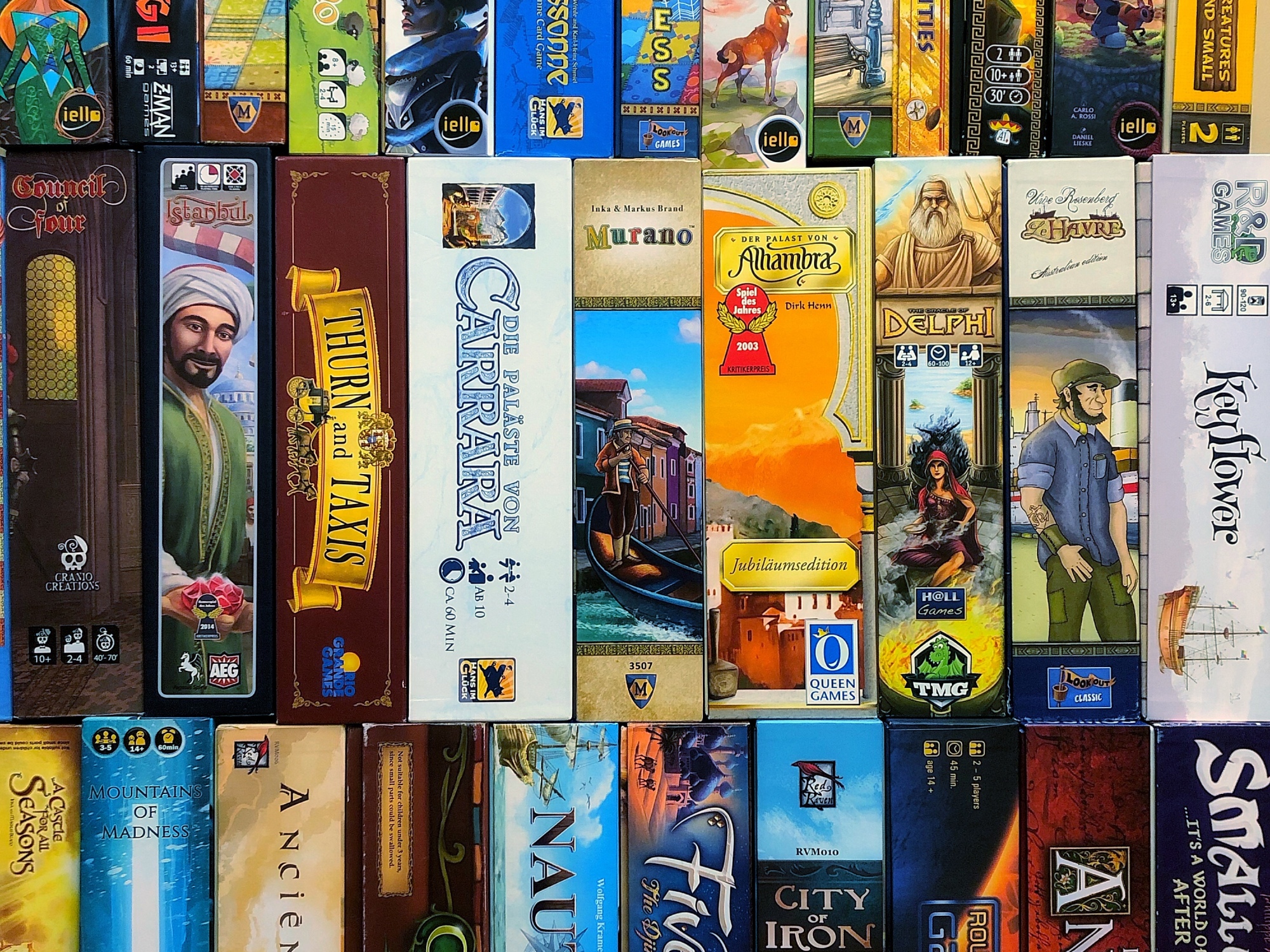 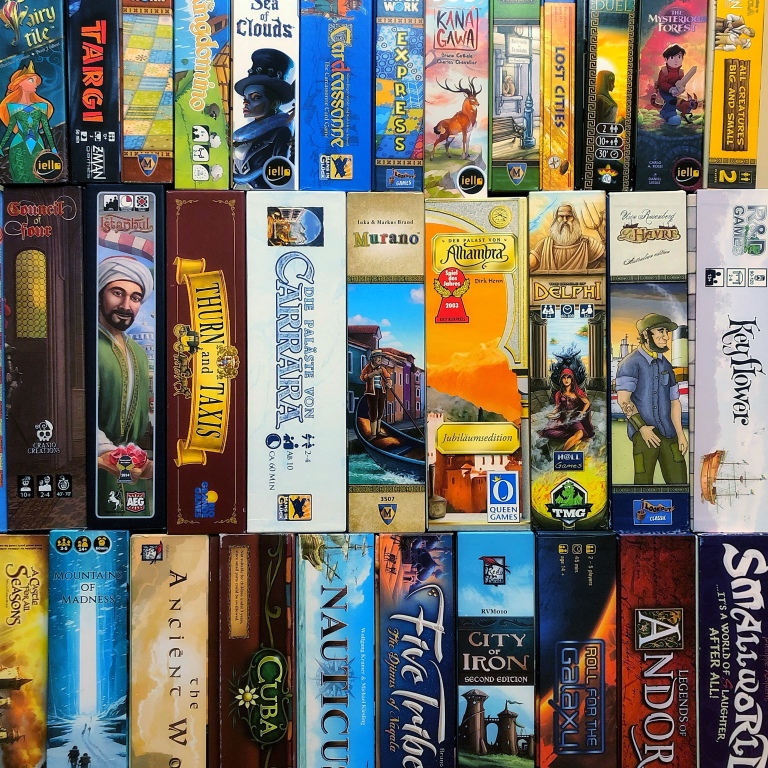 Have you ever walked into a game store, saw a game on the shelf sideways and said “Hmm, that looks interesting” and then picked it up and looked at the box art and was just amazed… and then bought it being cause of the art? I’ve done that before… I’ve stated how much I love art in a game, and I feel the box art is just as important as a book cover: it will totally draw you in and set a standard for what the game should be. So here are my 5 Board Game Cover Boxes, all of them by amazing artists… and yes, I bought a lot of these games based on the covers (and they all turned out to be great games as well!) 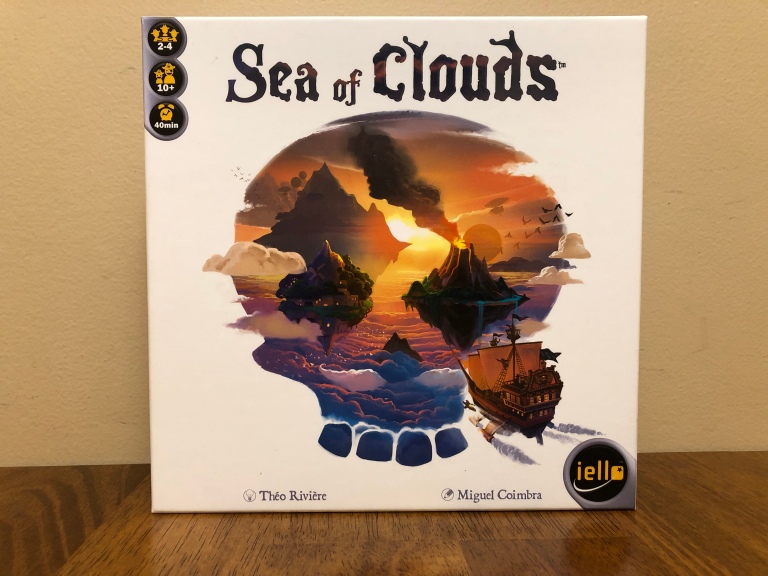 Skies are pretty cool and all… and I’m a huge fan of pirates… but Sky Pirates? I’m all in for this! I’m a huge fan of Miguel Coimbra’s artwork (7 Wonders, Fairy Tile) but this is one of his absolute best. Extremely bright and colourful, with the skull laid out perfectly, and the floating islands making the eyes, its a crowd pleaser for sure! The game is also fun, a press your luck set collection game that is quick and easy to learn. Iello always does an amazing job, and this is one of the best covers they have (except for the one later down this list… oops… slip of the tongue!)

4) Roll for the Galaxy 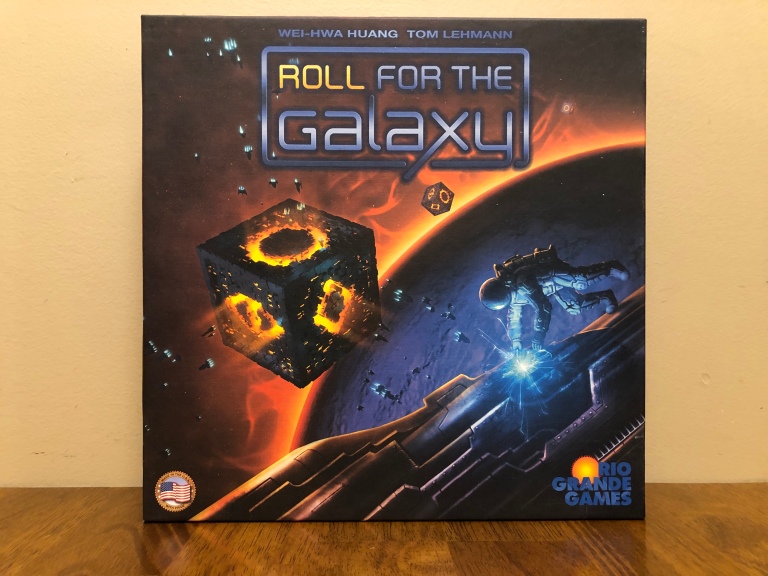 Roll for the Galaxy is a dice version of the card game Race for the Galaxy… which has a pretty drab looking box cover. But on the other hand, Roll has a really awesome palette where the blue and the orange contrast really well, but it’s that space station dice that really makes it stand out. Sci-fi games usually have comedic covers, dark/drab covers or super busy covers for their boxes, but Roll has a perfect balance of simple yet intriguing. The game is also solid, capturing the feel of Race for the Galaxy while providing some great dice mechanics (which already made another top 5 list) and looks great while doing it! 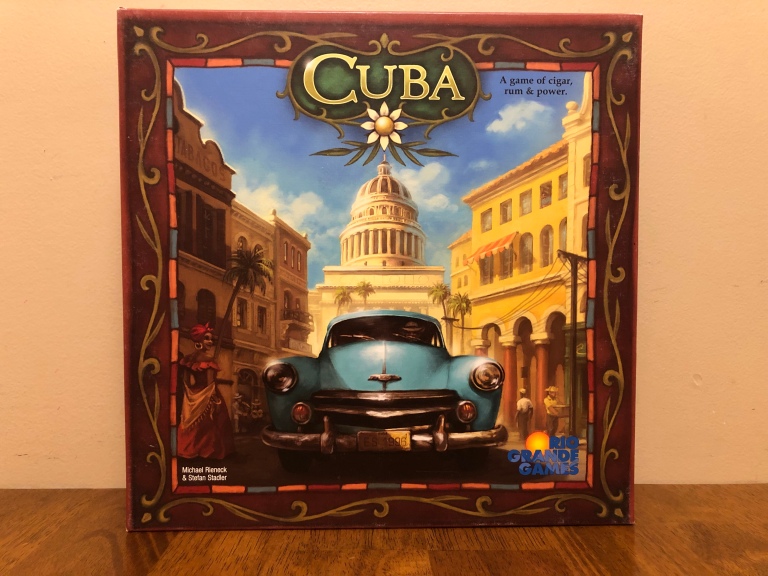 If you wanted to make a great Euro strategy game back in the day, and wanted it to look amazing, you hired Michael Menzel to illustrate it. From Catan, Pillars of the Earth, Stone Age and countless others, he’s illustrated over 100 games, but Cuba remains one of my favourites. Really capturing the spirit of pre-Revolutionary Cuba, with that 1950’s car and the stunning art, Cuba is one of those games that just draws you in with the cover and begs you to open the box. Inside, you will find a game similar to Puerto Rico but with some really great resource management mechanics and a great end of round voting system on laws which affect the next round of play. Cuba is a great game that looks just as good as it plays! 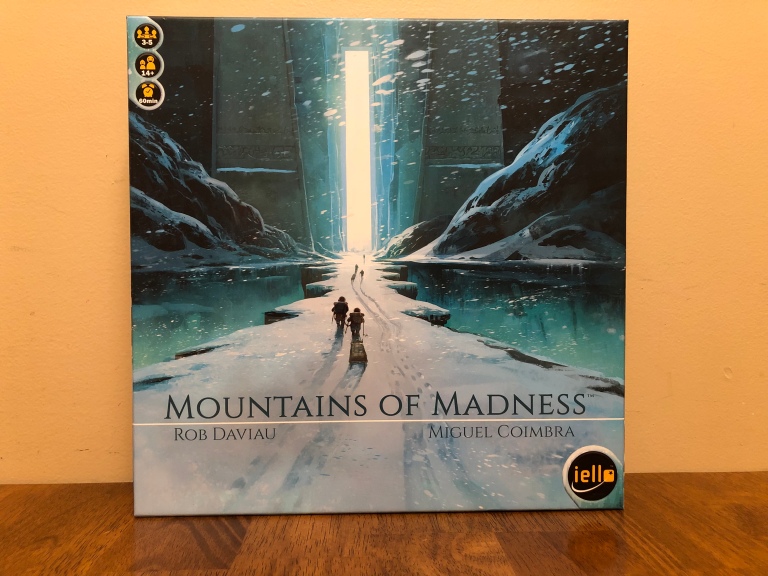 Iello and Miguel Coimbra are clearly a winning combination, and Mountains of Madness has one of the best covers of any game. Paining a beautiful yet haunting Antarctic landscape, it just draws you in to explore what’s inside that glowing light. The game is not what you expect. It is a co-operative, but with an added element of madness, where as you progress up the mountain you are trying to escape, you will gain psychological effects you must act out, which will hinder you from contributing to your cause. It’s a lot of fun, and this is a game where it doesn’t matter if you win or lose, because you will have fun doing either! And this would almost be my number 1, except there’s one artist that always has the most amazing art… 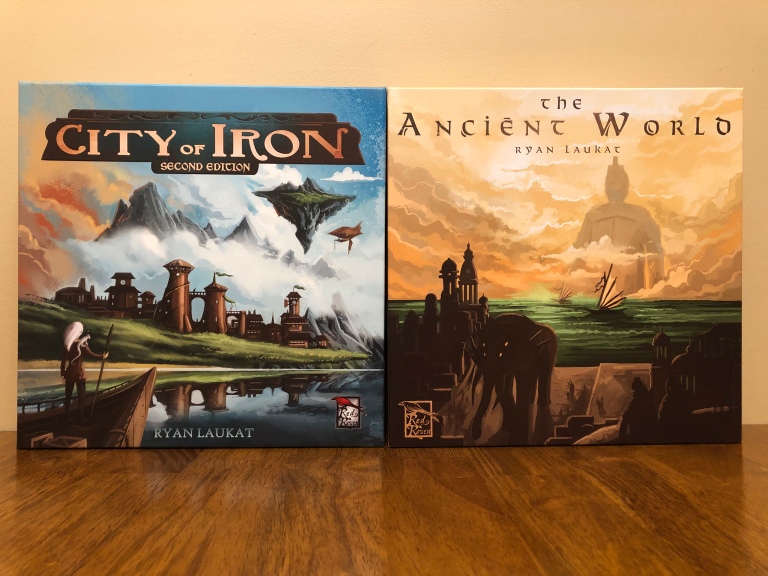 OK I CHEATED!!! I could have seriously made this whole list based off Red Raven Games box covers, and Ryan Laukat is extremely talented. He started off drawing cards for Dominion and soon created and published his own games, while also illustrating… and wow is he an amazing artist. I couldn’t narrow it down to one, so I chose 2 of them, for similar and different reasons. Ryan always paints a fantasy world I want to visit, and City of Iron just fills with awe (and yes, it has floating islands… if you can’t tell I like floating islands), and is just so bright and colourful. Meanwhile, The Ancient World paints a more dark world, mixing both Greek and Middle Eastern mythology, and with that tan skyline and green water with that colossus on the horizon, it is just epic. Both covers create fantasy yet do it differently, and I just couldn’t choose which one I like better. Forgive me for picking 2 games at number 1 but hey… 6 is better than 5, right?

So that’s my top 5… err… 6 board game covers. Any of those your favourites, or have ones that you just fell in love at first sight and had to have? Share your favourites in the comments below!

One thought on “Top 5 Board Game Box Covers”