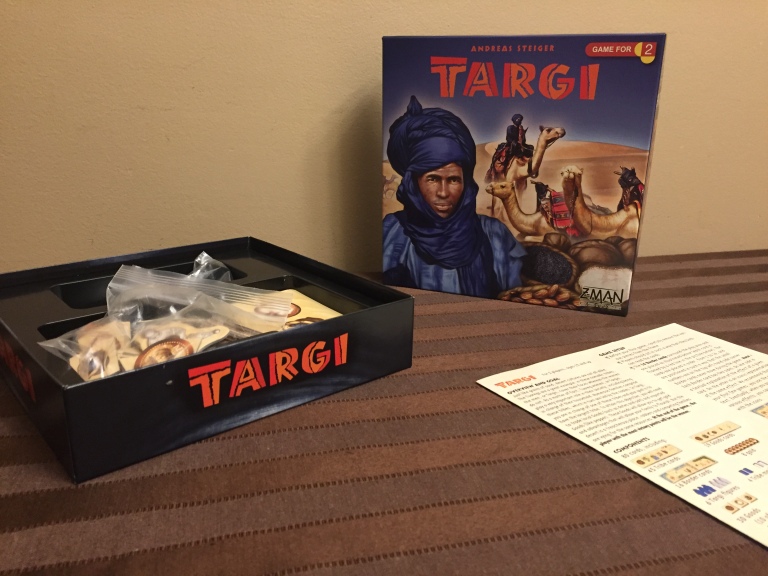 You’ve been wandering through the desert, riding on your camel in search of various good. Salt, pepper, dates, all luxuries you wish to trade for money and to gain prestige. But the other tribes are looking for the same, and it is said there are robbers in the desert who are on the lookout for unsuspecting traders…

In Targi, a 2 player game in the same size box as Lost Cities, 7 Wonders Duel and Patchwork, you are the leader of a tribe traveling through the desert in search of goods, camps and oases. You know my love of 2 player games, so lets find if this one stands out in my collection or just falls behind the rest.

The component quality is well made, thick cardboard and great wooden pieces. The art works for the game; it’s not very colourful, but it is going for a strong desert theme and it works well. The border cards have different terrains on them, which I thought was a nice touch. Overall, the game looks good and has great components. Nothing stands out, but there are no complaints either.

Targi at its core is a worker placement game. To begin, everyone gets their figures and tribe markers, 2 of each resource, 1 gold and 4 VP. Then you will set up the board by placing the border cards around numerically, and then filling the centre with 5 good cards and 4 tribe cards (as shown in the picture above). Then, the robber is placed on the #1 (noble) border card. The first player is the last person to have eaten dates (yum!), or if no one has the blue player goes first.

On your turn, you will be placing your targi figures on the boarder cards to get their respective actions, one targi at a time and alternating between players. There are a few rules regarding placement:

Once you’ve gone around and everyone has placed all their targi figures, then we place your tribe markers on the intersections. Imagine if you will, your targi figures make an imaginary line. Where those lines meet and cross on a card in the centre, you will place one of your tribe makers on the card, whether its a good card or a tribe card. Most of the time you will get to place both tribe markers, but occasionally you will only get one out. Once both players have done this, you will take the actions of your targis and your tribe markers. There is no specific order in which you must do them, but you must fully complete one action before starting another. If you do a border action, you remove your targi figure and put it back in front of you. If you do a tribe marker action, you either take the good on the card and place it in your reserve, or purchase (or reserve) the tribe card and place it in one of your 3 rows (more on that in a bit). Once you remove a card from the centre, you replace it with a face down card that is the opposite of what you took (example, if you took a tribe card you replace it with a good card). You may also choose to pass, removing a targi or marker off the board and not performing the action.  Once every player has completed all the actions, the round is over and the new one begins. To begin a new round, you will move the robber over to the next border card and flip over all the face down cards put out this turn. Then every player checks their supply; you may never have more than 10 goods and/or 3 gold at the end of a turn. You must discard down to the limit (you may have more than that during your turn and spend it, but as soon as your actions are all done you must discard to your limit). Pass the first player token and begin a new round.

A few things I want to explain about the game. First, on each corner of the border is a raid card. Raids are performed at the end of rounds 4, 8, 12 and 16. After everyone has taken their turn, and before the robber is moved, players must pay either goods or victory points that round. The second is about the tribe cards. When you play tribe cards, you play them in front of you making up 3 rows of up to 4 cards in each (thus up to 12 in total). If you already started a row, you don’t have to place it the same row, you can start another row. The tribe cards will have one of five different symbols on it. If one row has 4 cards with the same symbol on it, you will receive 4 extra victory points at the end of the game. If 4 cards have 4 different symbols, you will receive 2 extra victory points.

There are 2 different end game conditions. If one player has placed their 12th tribe card, the game will finish at the end of that turn. Or, if the robber reaches the last raid card (card 16), the game will end after that turn. Then we proceed to end game scoring. You will count the Victory point tokens, the victory points on your tribe cards, and bonuses for symbols on your rows of tribe cards, and check your tribe cards for any extra points (some cards give you extra points for meeting certain conditions). The person with the most points wins the game! In case of a tie, most gold wins, and if gold is tied, most goods wins, and if you are still tied (wowza), play another game to break the tie (its in the rulebook!)

If you’ve been reading my reviews, you know I love a good 2 player game. Most of the ones I’ve reviewed are shorter (30 minute playtime), but sometimes you need something with a little more meat. Thats where Targi comes in. It plays about an hour your first time, and quicker as you learn the rules. I love the interaction in this game; you really block your opponents by placing and making them constantly changing their tactics. I also love how you may not take the action you really want, but you take one knowing you’ll have the option of taking a card with your tribe marker in the middle, only to have your opponent block your spot and vice-versa.

This really feels like a more complex game in a small package, and some worker placement games which are designed for more players don’t feel too great with 2. So having one designed specifically for 2 players really works great. I also like the limited resources; goods are in short supply, and gold is really hard to come by.

There a few things that aren’t perfect.  Sometimes, you can really end up with some bad moves in this game and are stuck with cards that you can’t play or don’t need, and feel like your turn is wasted. This doesn’t happen a lot, but that can really hurt you especially in a close game. I’ve had it happen to me a few times, but it also happens to your opponent as well. It can get frustrating, but its part of the game.

If you play a lot of 2 player games, and like worker placement, Targi should be a no brainer. It feels great building your tableau, placing your workers in optimal spots to get the cards you want, and blocking your opponent. I also love that the border cards are double sided; one side with words explain the actions, and one side with just symbols for players who are used to the game, which really make it look prettier. So go get Targi, and build the best tribe that you can!

One thought on “Targi”