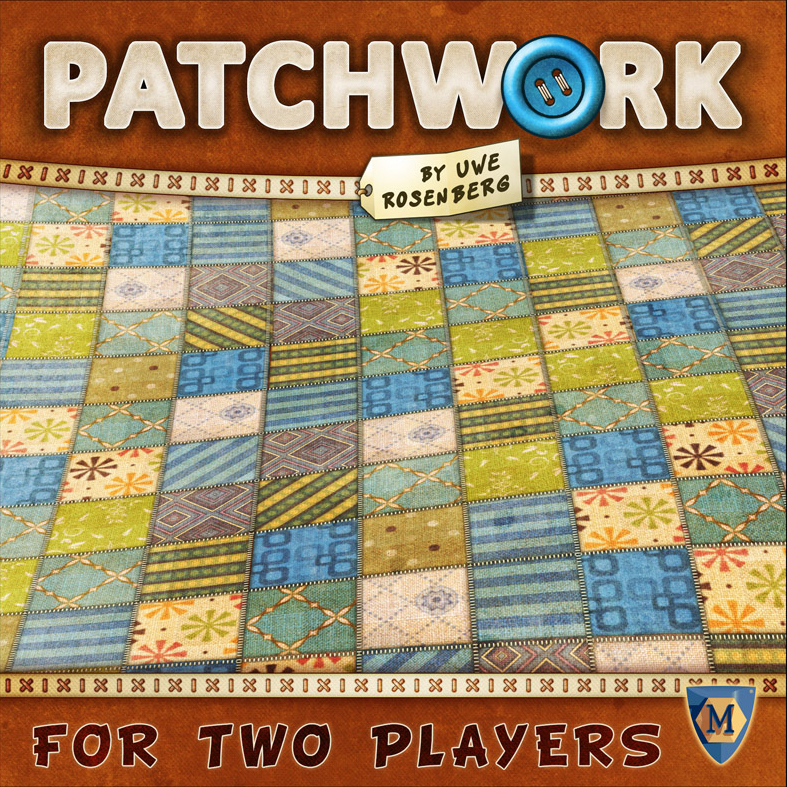 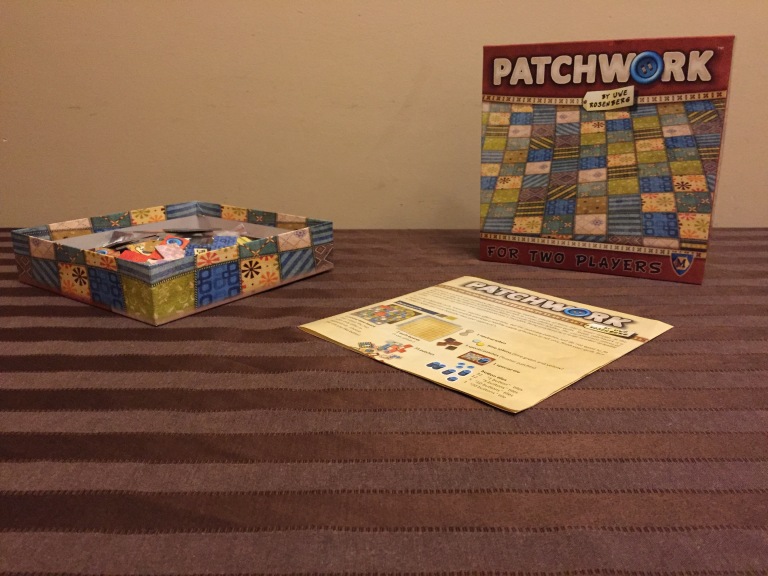 Got fabric scraps hanging around your house? Spare buttons? Well, sounds like a good time to make a quilt! But uh oh… your friend ALSO wants to make a quilt. Using YOUR scraps… and buttons! Let’s see who can make the best quilt in the least amount of time while ending up with the most buttons!

Patchworks is a 2 player game where you are trying to fill your board with odd-shaped pieces of (cardboard) fabric and trying to accumulate buttons. The buttons not only let you buy more fabric, but also score points at the end of the game. But you better not leave too much room on your board or it’s gonna hurt you at the end!

Inside the box there are 2 quilt boards (one for each player), a time board, 2 time markers, 1 neutral token, 33 unique patches, 5 small leather patches, 1 special scoring tile and 50 button patches.

This being a Lookout/Mayfair game, the components are always of great quality. Thick cardboard and solid wood pieces. And every fabric tile is unique and super colourful! The game itself is fairly abstract and the theme is somewhat pasted on. It feels more like you’re building a puzzle than making a quilt, but they really pasted on the best theme possible. And with the game being a small square 2 player size box (like Lost Cities and 7 Wonders Duel) there is a lot of game in such a small box!

To begin, each player gets a quilt board and 5 button tokens. Then, you set up the time board (it comes with 2 sides, different artwork but the same amount of spaces) by placing it in the middle, putting the small patch pieces on their respective spots and putting the player markers on the starting spaces. Then arrange all the tiles around the time board and locate the smallest piece (1×2) and place the neutral token between it and the closest clockwise piece. Then, make sure all the buttons are within reach (including the special tile) and you’re ready to start quilting (rules actually state the player to last use a needle goes first. Which explains why my wife always gets to go first).

This game is unique as you don’t necessarily always alternate turns. The person who is behind their opponent on the track will always be the one taking their turn (if the person lands on the same space as their opponent, they are on top and keep going until they pass). On your turn, you will do one of the following 2 options:

You can move on the time board so that you are 1 space ahead of your opponent, and you will receive 1 button per space you moved (so if you were 3 spots behind your opponent, you will move 4 spaces to be ahead of them and get 4 buttons

This action has 5 steps:

Thats your options! Now, there are 2 things that can occur while you move your token on the time board. First is, you can gain income by landing on or passing a button on the board. You’ll notice some of the tiles have buttons on them; whenever you land on or pass a button on the board, count your buttons on the patches on your board, and take as many buttons that you can spend. The second is the patches… there are 5 1×1 leather patches on the board. As soon as you land on one or pass it, you can take it and immediately put it on your board, filling any little annoying gaps. The last thing that can happen is that the first player to completely fill in a 7×7 space on their board will receive a special tile that will give them 7 points at the end of the game!

So that’s it… you keep playing until both players reach the end of the time board. Then you count up all your buttons you have and that’s your points. But… there is one more little thing. You will lose 2 points for every empty space you have on your board… so you gotta remember to fill as much as possible! You subtract that from your buttons and that is your final score. Person with the most is the winner! And if you have that special tile, don’t forget to add it to your final score!

I grew up playing Tetris, so I have a natural love of trying to make odd shaped pieces fit together well. My wife has a sewing business, so naturally this game appealed to both of us. It’s one of my favourite all time 2 player games. Its so simple to play… but I wasn’t actually expecting this much challenge when I first played it. You have to keep such a balance between buying tiles and making sure you get enough income on your board and making sure you cover as much as possible so you don’t lose points. And the fact that you only have 3 tiles to choose from really makes it challenging. I also love the time track, taking a really good tile may let your opponent take multiple turns because they aren’t using as much time as you.

There’s been quite a few games recently that are making you fit odd-shaped tiles together, no doubt influenced by Patchwork. But this game really stands out on its own, and might be one of my favourite 2 player games. If you love puzzles, strategy or sewing, then this is the game for you!